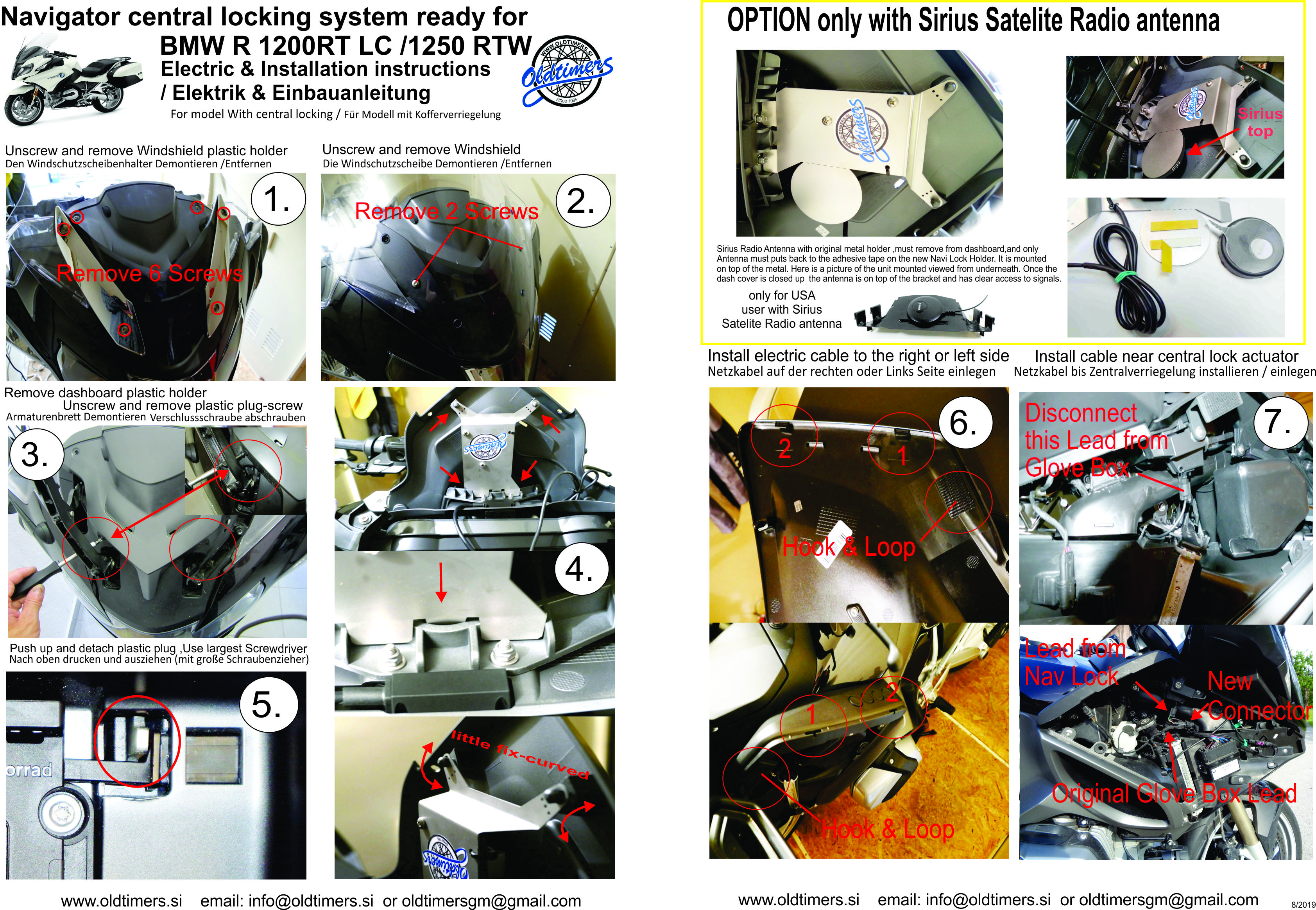 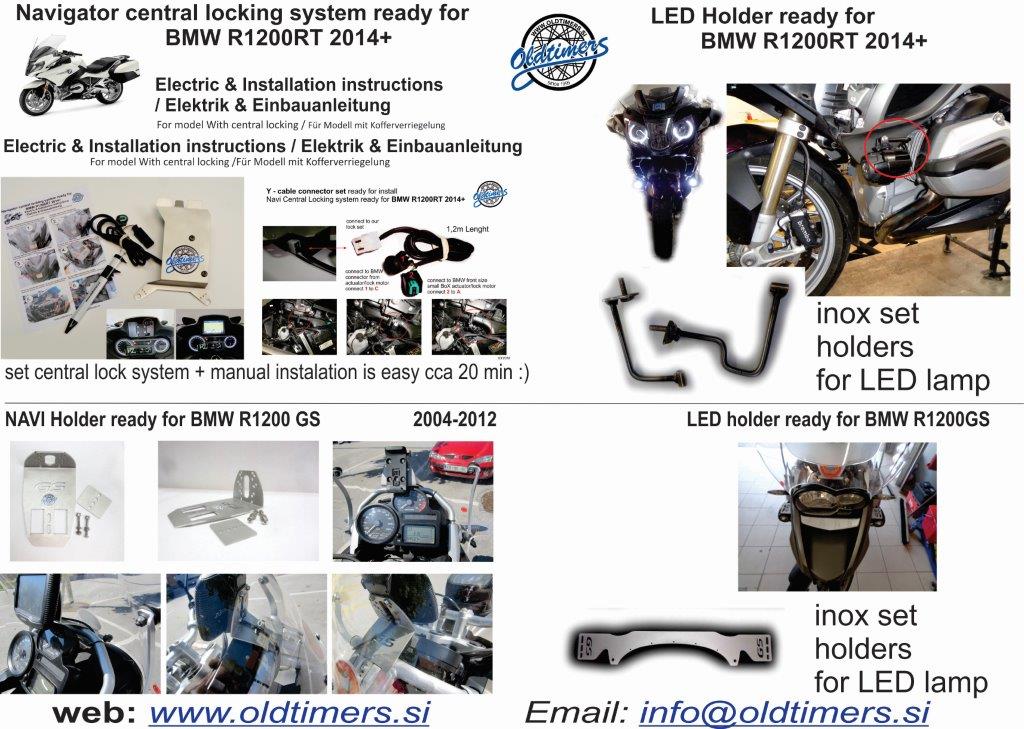 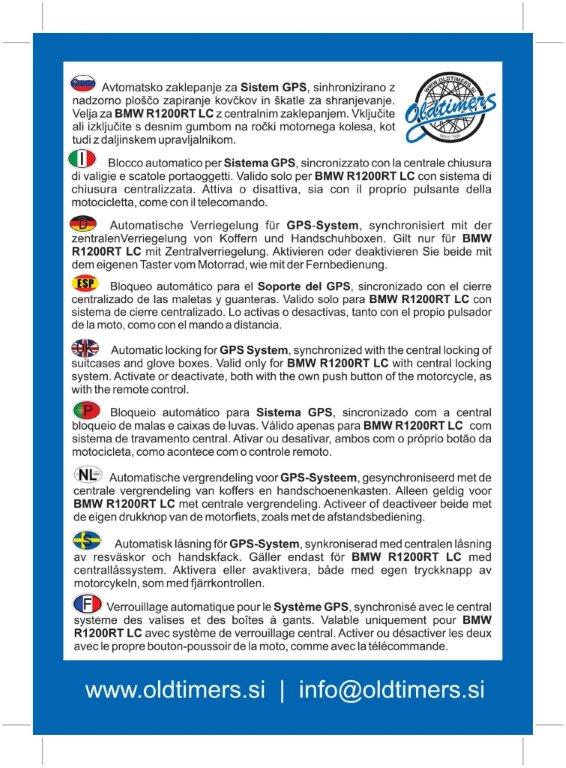 RT Sat Nav Lock
With the RRP of the BMW Nav 6 at almost £700 it makes sense to protect your investment.
While GS owners have the ability to lock their sat nav on the bike, and the K1600 protects its top-loading sat nav once the screen lowers with the ignition off, those of us who own RT models built after 2014 have always had to risk losing our units due to lazy design by those Bavarian engineers.

Wunderlich produce what they describe as a Navigation Security Kit, which purports to be a combined anti-theft device and sun shade. Unfortunately it doesn't appear to perform either of these functions very well.

I was looking for a less obtrusive and more robust solution, and believed I had found it when I saw a Youtube video from a company in Slovenia called 'Oldtimers''. Being an old-timer myself I was not put off by the company name, and contacted the company via their website. My queries were answer very quickly by Matjaz and I duly sent £150 via PayPal. Just 3 days later a package dropped through my letterbox. The unit looked to be very well made, and from the enclosed instructions it didn't look too difficult to fit.

Essentially it is linked into the central locking system by piggy-backing of of the actuator for the left or right glove box. When the boxes are unlocked the sat nav can be removed using the release button as per normal. However, when the central locking is activated the button cannot be operated, thus preventing the sat nav from being removed. On a bike with keyless ignition the sat nav is therefor locked on as soon as the key is out of range.

I'm not particularly comfortable taking machinery to bits and putting it back together again, but even I found this a pretty simple modification. I fitted it to our 2014 R1200RT in about 30 minutes. A week later we decided to trade in for a new R1250RT, so I removed it to fit to the new bike. The photos below show the unit being fitted to the new bike.

First remove the six torx screws shown in the photo. If you prefer, you may leave the two on the instrument cowling and remove them later. 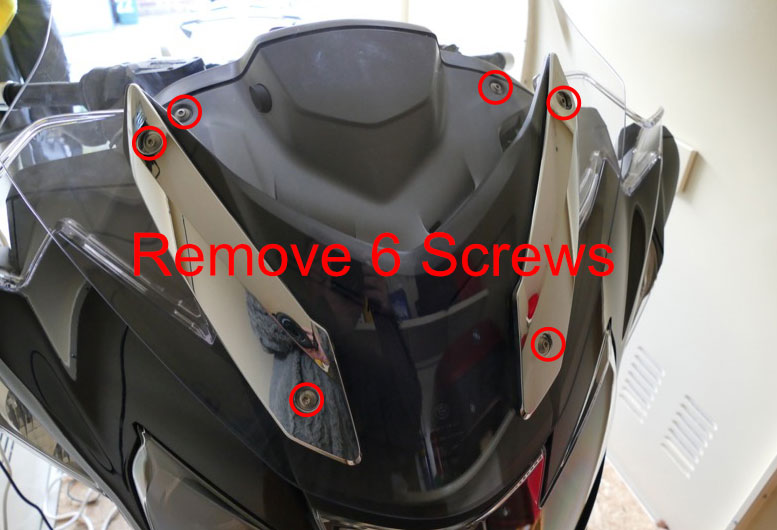 You can now remove the chrome (or black, depending on model) trims to reveal the remaining two screen-retaining screws. 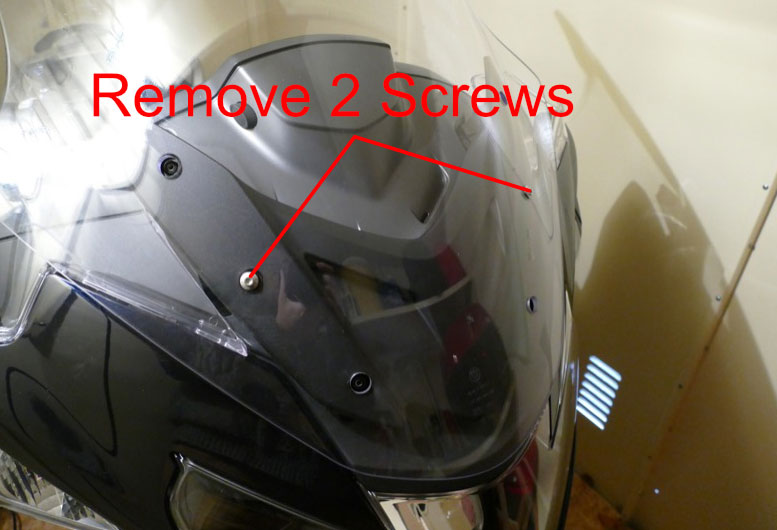 Lift off the screen and put it somewhere safe, then lift off the black plastic screen carrier (shown in photo below). 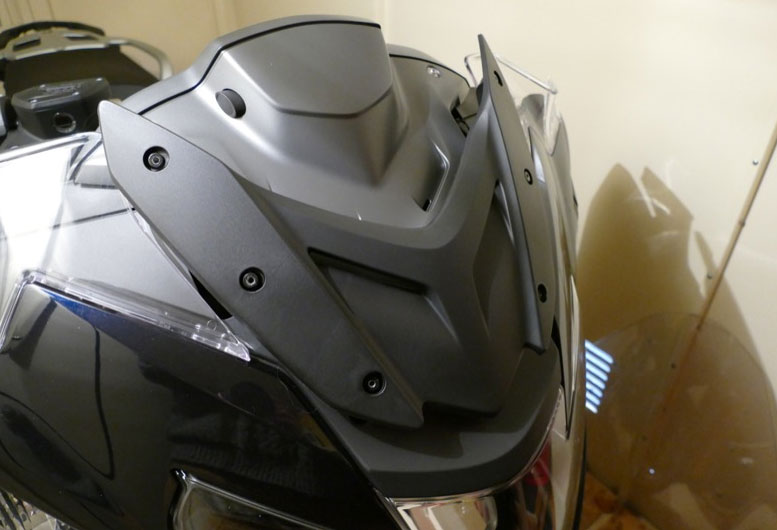 You can now see the fixings at the front of the instrument cowling. It is held on at the front by two plastic bifurcated rivets with plastic screws. I found that once the screws were loosened but not removed, as in the photo below, the screw complete with rivet could be easily pulled out. 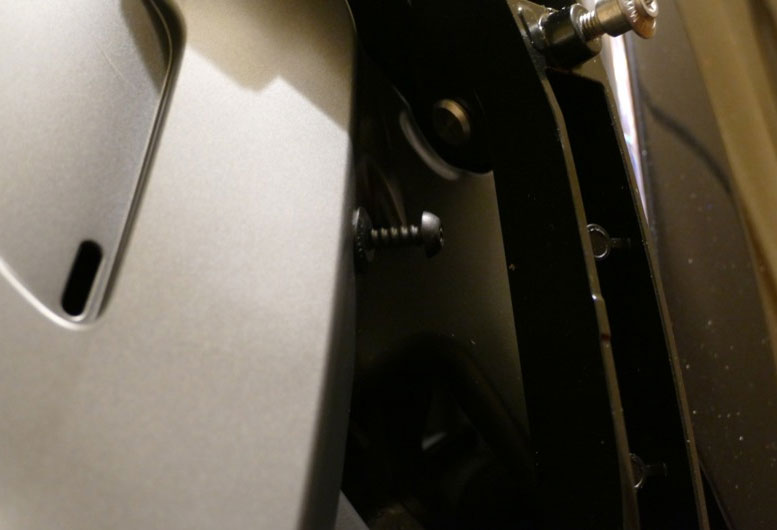 Once the rivets (and two torx screws mentioned earlier) have been removed the cowling is held in place purely by two studs in rubber grommets. Pry the cowling up gently from the front of the bike and flip the cowling forward as shown below. 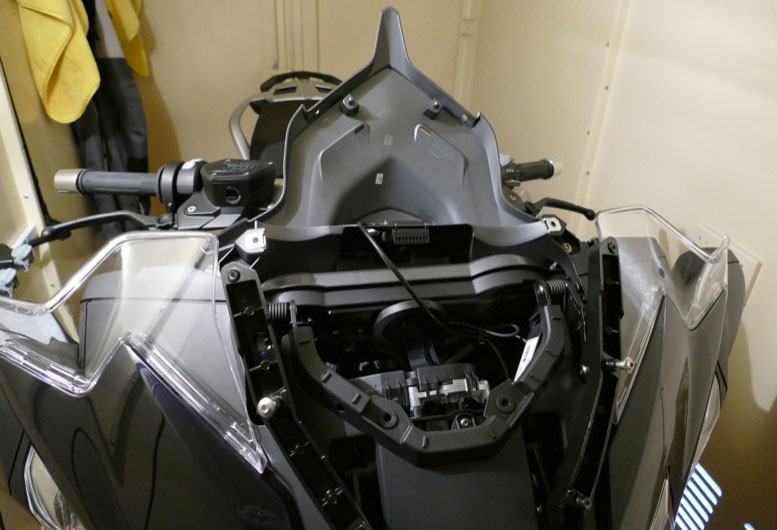 The Oltimers sat-nav lock simply slots in the cowling as shown with the holes in the front legs pushed over the two locating studs.

The next step is to connect up the wiring, which requires you to remove either the left or right fairing side panel to get access to the connector on the glove box lock actuator. Start by removing the two torx screws at the bottom of the panel. 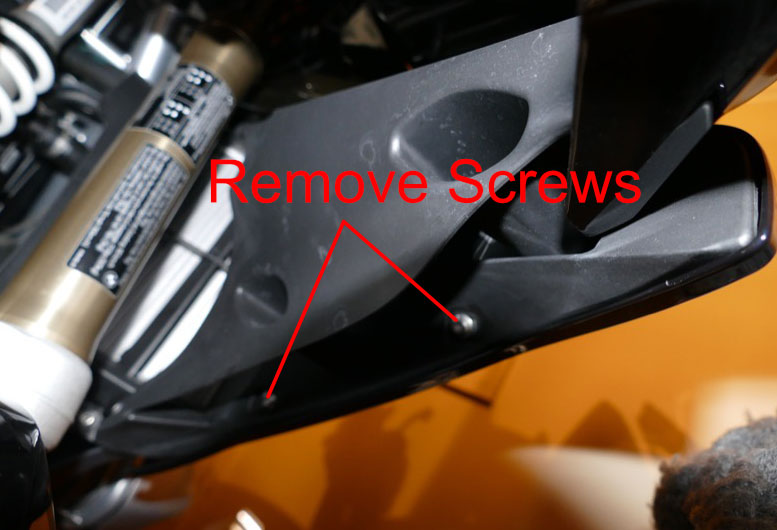 Once the two bottom screws have been removed CAREFULLY pry the side panel out from the bottom. The panel is held in place by a couple of studs in rubber grommets near th bottom of the panel and two clips in holes at the top of the panel (1 & 2 in the photo). There is also a patch of hook and loop which you have to release before you can lift the panel clear. Do this carefully - you do not want to break the clips moulded on the panel. 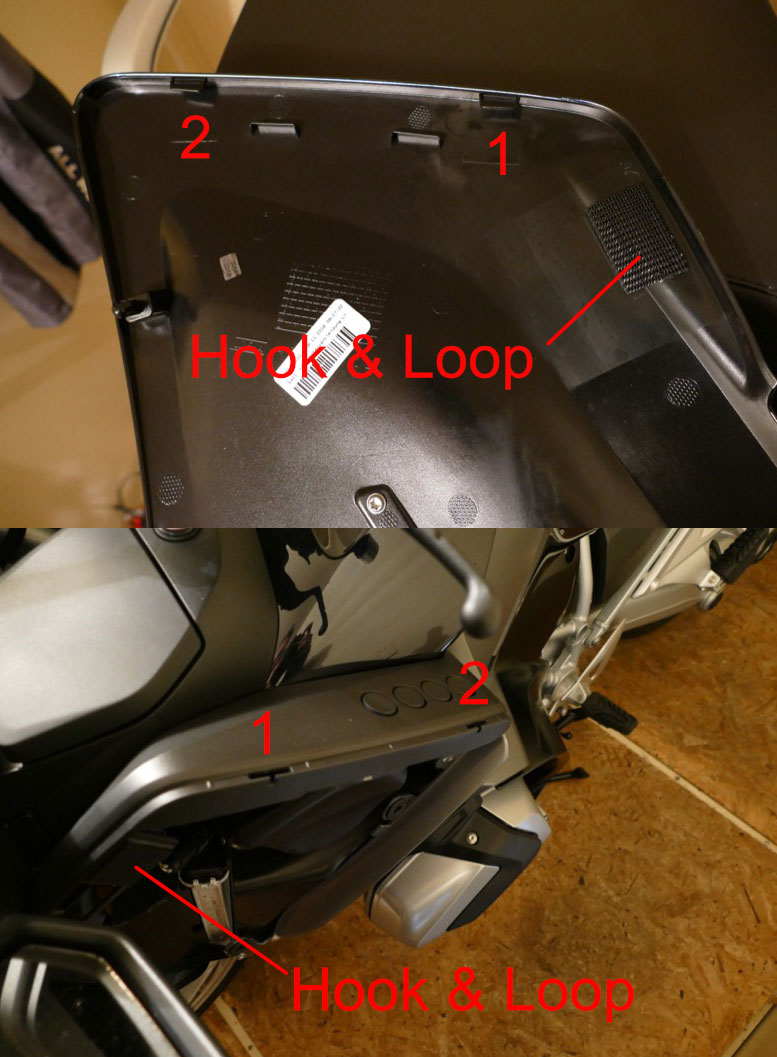 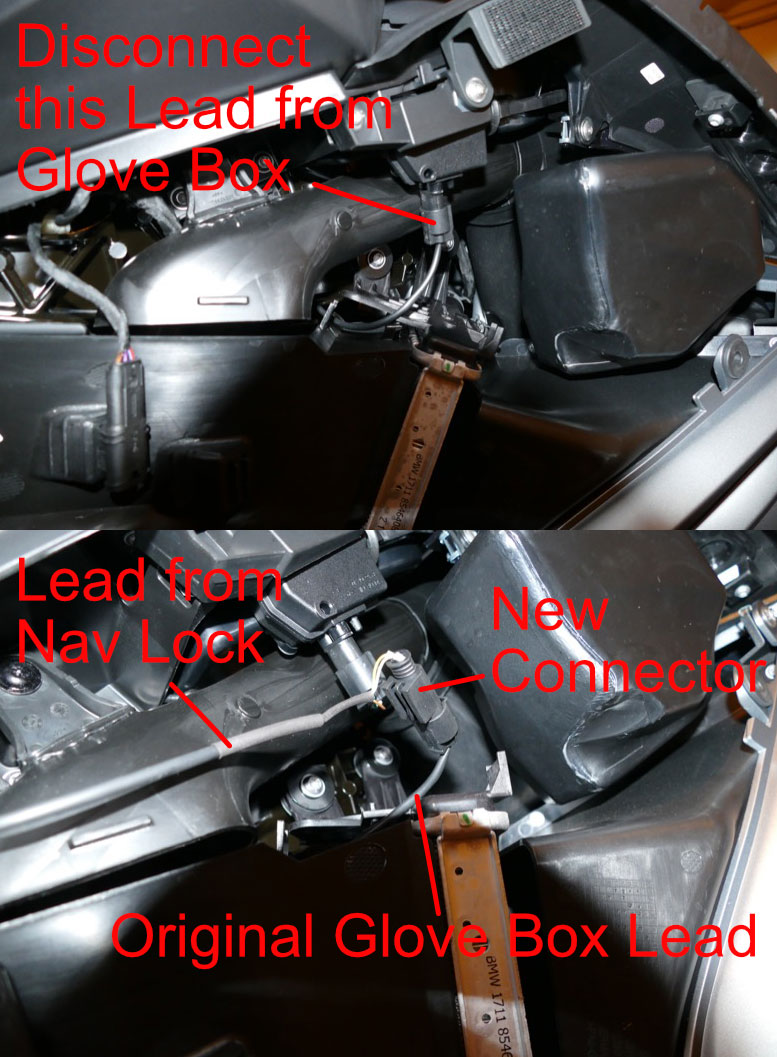 That's it! After checking that the unit is operating correctly, as shown in the video below, simply reassemble everything, which is just a reversal of the process above.

The Oldtimers unit is an elegant solution to a problem that should not really exist….. but does. It is simple enough to fit that even I could manage it, does not upset the look of the bike (unlike the Wunderlich 'mecanno' bracket) and so far has worked faultlessly. If I was leaving the bike unattended for a long period, such as overnight in an area I did not know, I would still remove the sat-nav to avoid tempting the light-fingered gentry, but for short stops like fuel and food this is should hopefully foil the opportunist scallywag.